Salmon in the Classroom

If you are a northern Douglas County school teacher and you are interested in hosting a salmon tank in a future school year beyond 2020, contact Elizabeth at 509-888-6372.

Educating youth on the importance of clean, copious water for humans, fish, and wildlife to share is part of Foster Creek CD's mission.  Salmon-in-the-classroom teaches K-12 students and adults about the salmon life cycle, their need for clean water to survive, and responsibility of caring for a tank.

Students and teachers host a tank from early January until their release day, typically in late April or early May.  Students test the tank water for ammonia, nitrite, nitrate, and pH levels on a weekly basis to ensure the health and survivorship of their salmon.

Chinook salmon are anadromous, meaning they are born in freshwater, migrate to the ocean, and return as mature adults to their natal streams to spawn.  The release of these Chinook fry from their classroom tank is just the beginning of their journey and the start of many obstacles that they will face.  If they survive into adulthood, they will return to the upper Columbia River to spawn.

FUN FACT:  Steelhead are the only salmon that are iteroparous, meaning a percentage of them can survive after spawning.  These incredible salmon are referred to as "kelts". 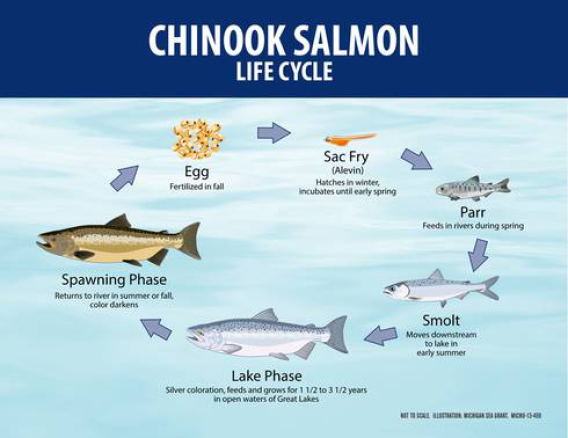 Over the past two years and with the help of the Douglas County PUD and Trout Unlimited, FCCD has now brought Salmon in the Classroom to Bridgeport High School, Mansfield Middle School, Mansfield Elementary, and Waterville Elementary.  In early January, 250 summer Chinook salmon eggs were delivered to classrooms hosting a 55 gallon tank.

Over the winter and early spring, participating teachers and students will hatch, raise, feed and finally, release the salmon in mid-spring. 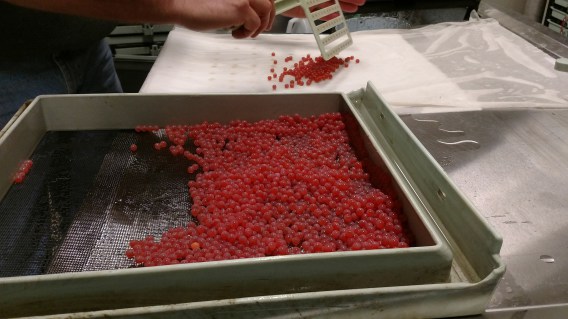 Eyed-eggs are received from Wells Hatchery in early January 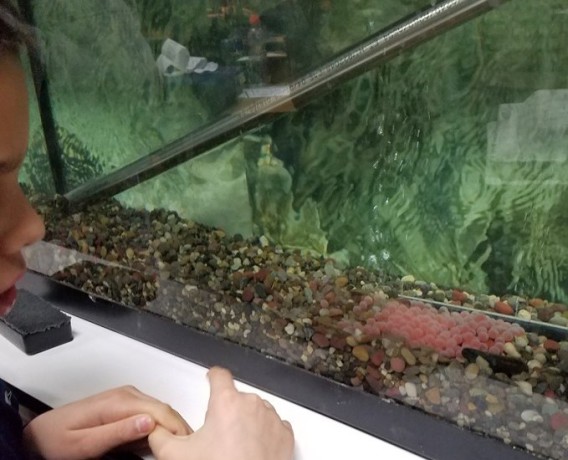 Student looks on to the newly delivered eyed-egg Chinook 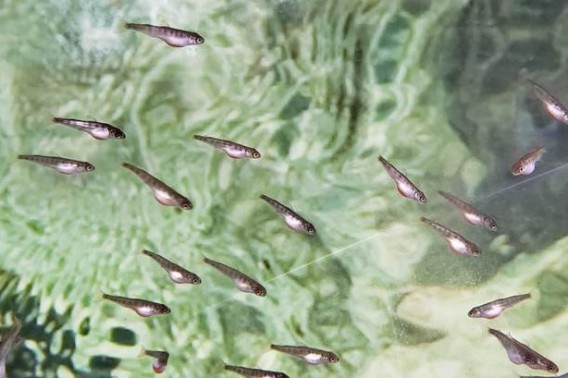 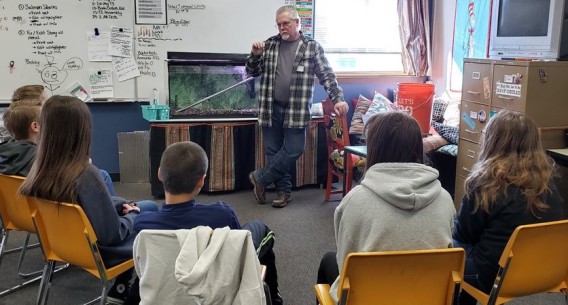 FCCD staff and Patrick Phillips (pictured), Douglas Co PUD, visit the classrooms to check on the health of the salmon and provide water quality presentations

Since 2018, 589 summer Chinook fry have been released into lagoons in the Columbia River.  Release locations include Walla Walla Point Park in Wenatchee and Columbia Cove Park in Brewster. 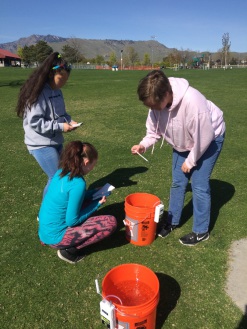 Students measure and record the water temperature of the Columbia River and the transportation buckets (in orange).

Allowing the salmon to acclimate to the river water temperatures will increase their chance of survival by decreasing the shock of the cooler water to their system.  Think of jumping into Lake Chelan in May - brrr, that's cold!

Additionally, salmon smell their way home.  This acclimation process gives the salmon an opportunity to smell their new "home" to which they will return to as adults to spawn. 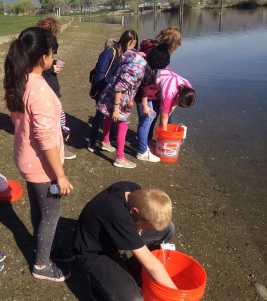 Students wait their turn to scoop a cupful of fry to release simultaneously into the river.  Strength in numbers help these young salmon survive when faced against predators, such as, the Northern pikeminnow, piscivorous birds, and other larger salmon. 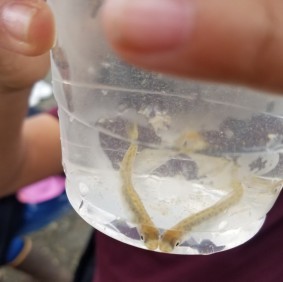 Two Chinook fry waiting for their turn to be released into their new home.  They will remain in the Columbia River for several more months, building their strength, until making the long journey downstream to the Pacific Ocean. 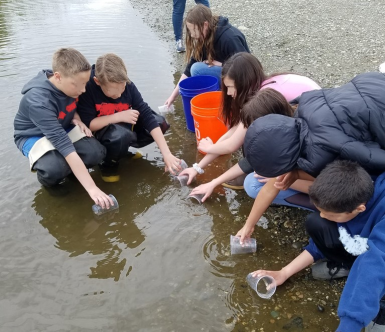 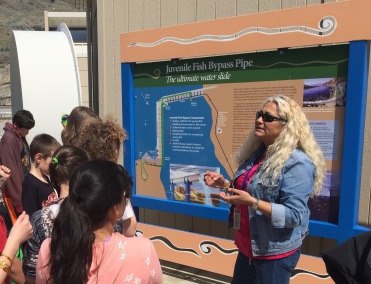 After the release, most schools experience a tour at the Rocky Reach Discovery Center to learn about fish health, water quality, and hydroelectric dams along the Columbia River. 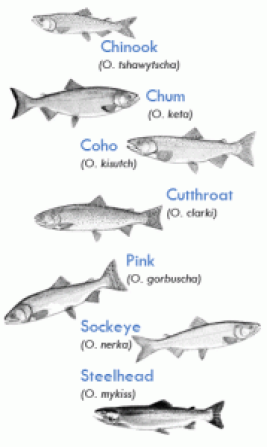 There is a variety of Oncorhynchus (genus in the family Salmonidae) in the Pacific Northwest.  Salmon-in-the-classroom focuses on the endangered O. tshawytscha, or the Chinook salmon.

Thank you to our sponsor, Douglas County PUD,
for providing us with a tank, supplying the eyed-egg Chinook from Wells Hatchery, and Q&A support to administer this program.

Thank you to our other sponsor,
Trout Unlimited, for providing us with a second tank.

All necessary permits to handle and release these summer Chinook are obtained through the Washington Department of Fish and Wildlife.